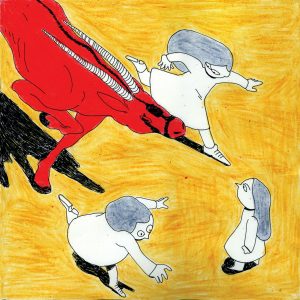 Pleasure Chop Wood, Carry Water
Label Disasters By Choice
Cat. Number LPNUY008
10” black limited edition. Release date 04/11/2022
Pleasure is a Sydney based music project that utilises distorted
synths, irregular drum beats and fluid song structures to create
energetic and hypnotic pieces that straddle the line of bright and
abrasive. Following up their LP Saint Alban’s, Pleasure puts forth a
10” Chop Wood, Carry Water. The 7 track record ranges from meditative
groove to bombastic destruction all spiked with their signature wonk.
Recorded primarily in their own studio spaces the tracks capture the
band in a more exploratory state.
The trio is comprised of Adam Connelly (synthesizers + vocals)
Jonathan Boulet (bass guitar + fx pedals) and Hugh Deacon (drums).
When playing live and on record, their music is improvised and
unrehearsed with no laptops or backing tracks. “One of us will
introduce an idea and the rest will follow.”

TRACK 01 SELF SUCK 210321 was from a jam right around the time we were
releasing our last album and i was fixated on trying to jam in a way
that was going to result in a more radio friendly track. not sure how
much we succeeded with that. kind of wish it got to the point a bit
quicker. after that we have TRACK 02 I’M READY 190813. the main synthy
chord that starts it is actually jono on the bass somehow. we can’t
remember how this was done but i think it’s pretty cool. also kind of
annoying that i have so many synths in my setup and jono makes a
cooler sounding pad using his bass. hugh didn’t want TRACK 03 GET OVER
IT FUCKHEAD 200731 to be on the record cause he said the drums sound
like he’s running out of ideas. i think the whole thing has an
interesting mood so wanted to put it on. hence the title. when we have
a show coming i usually get a bit nervous about what we’re going to
play because we don’t really have songs but then that’s kind of the
point anyway TRACK 04 HENSON 190719 is from one of those sessions. we
have hours and hours of jams like this, that i feel like have good
energy, but they don’t really go anywhere so only feel good if they
are really long or really short. also generally it takes us ages to
setup and hugh and i start playing while jono is still setting up his
session for recording and so he starts recording in the middle of a
jam, and we miss the start of it. they’re normally the better ideas as
well for some reason. this was one of them and those are the reasons
it’s so short. we were asked to compose the theme song for a podcast
about sex called Search Engine Sex so we booked an evening in the live
room at Golden Retriever and jammed for about 2 hours. i liked a lot
of the stuff that came out of it and we had to heavily edit one of
them to make it work for the podcast. TRACK 05 LOVE INSIDE ME feat.
The Good Boys 200219 is from that session and we got our great friend
andy from The Good Boys to do a guitar solo on it. first time we’ve
really collaborated with someone like that outside of the live shows.
andy is really great. then there is a track to try encourage everyone
in our community who may ever use or be around anyone that might use
party drugs to try have a safety measure called naloxone around
because it can save lives. someone in the sydney music community
tragically died in an accident that could have potentially been
prevented if there was more awareness to the access of naloxone. it’s
TRACK 06 BE SAFE (YOU CAN GET NALOXONE IN NSW WITHOUT PRESCRIPTION
FROM ANY PHARMACY) 191012 the plan was to put a song to radio where
the DJ would have to read the track name out and spread awareness and
some really great shows on community radio across australia did. it’s
probably the first time i’d felt like our music was really doing
something good in an altruistic way and it got me thinking about all
these great artists that have political and social purposes as a core
part of their practice and how much more sense that makes to the
somewhat self indulgent aims that our practice has. it’s from the
saint albans recording and i always really liked it but thought it was
maybe too similar to that brain waste song. now we’re back in jono’s
room. the room that’s on the back of this insert. we had a jam after
not seeing each other in a long time which resulted in TRACK 07 HARDLY
210203. this is the first time i had ever used the Soma Laboratory
LYRA-8. chop wood, carry water. if you have any thoughts, feelings or
questions i would love to hear or discuss them.