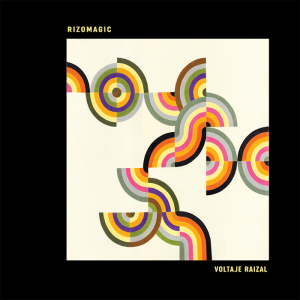 Voltaje Raizal will be released on vinyl by the italian label Disasters by Choice on November 21 supported with a musical video for their song CumbiaAchiampong by the colombian visual artist Martin Sanchez.
The sounds of the album are rooted in the Afro-Caribbean musical tradition, in the mixed ancestry that defines Colombian culture, and IDM.

The melodic construction of the album takes inspiration from variouscultures, including Indigenous chants from Colombia’s Embera people, the traditional scales from Mali’s Bambara ethnic group, and the Ghanian palm wine guitar interpreted by a Caribbean millo flute. The mix and masterization carried out by Eblis Alvarez ( Meridian Brothers, Pirañas, Chupame el Dedo) and Camilo Manchego offered the final touches that make Voltaje Raizal a fresh proposal to Colombia’s futurist tropical scene. “ Rizomagic set our to recontextualize their sources. It’s no coincidence that their name comes from rhizomatic, the botanically derived term for a subterranean, horizontal network of roots”